Apple Watch Series 7, the latest addition to Apple’s wearable tech family. The Series 7‘s new features have the potential to add more convenience to a lot of everyday tasks, from checking the time to responding to texts and tracking your sleep.

Apple unveiled the $399 Apple Watch Series 7 during its product launch event on Sept. 14 alongside the iPhone 13 family, a refreshed iPad Mini, and a new entry-level iPad. The company hasn’t specifically said when the Series 7 will launch, beyond later this fall.

Here are the best exciting new features of the Apple Watch Series 7.

The Apple Watch is getting a new, QWERTY keyboard that takes advantage of its larger screen, which is about 20% bigger than the Series 6’s, allowing you to type similarly to the way you would on your phone.

What’s new: A full-size keyboard means that you won’t be limited to sending a canned response to a text, scribbling a quick note or dictating a message, as is the case with the Apple Watch Series 6. How you’ll use it: The Apple Watch Series 7’s QWERTY keyboard will let you tap each key to type, or use Apple’s QuickPath feature to swipe between letters without lifting your finger.

The bottom line: The Series 7’s QWERTY keyboard should make it easier to send longer and more complex messages that are uncomfortable to scribble or too private to dictate. It’s another example of how the Apple Watch has evolved to become better at working independently of your phone in the years since its launch.

The Apple Watch Series 7 is getting its first major redesign since the Series 4 launched in 2018. The new watch will come in 41-millimeter and 45mm sizes for the first time, representing a shift away from the 40mm and 44mm sizes that were available on the Series 4 through Series 6.

A brighter screen in always-on mode

Apple is also updating the Apple Watch’s display in a different way by making the screen more visible in always-on mode. It’s another addition that should make it even faster to get quick bits of information from your watch.

What’s new: The Apple Watch Series 7’s screen is up to 70% brighter in always-on mode when your wrist is down, according to Apple. However, Apple specifically says this applies to indoor usage, so it’s unclear whether you’ll see meaningful gains outdoors in direct sunlight.

How you’ll use it: The Series 7’s improved brightness means it should be even easier to see information like the time, your activity rings and your next meeting without having to wake the watch’s screen.

Fast charging as compared to Series 6

We’ve been asking for more battery life out of the Apple Watch for years, but that’s especially relevant now that Apple has added native sleep tracking to its smartwatches. Rather than extending the watch’s battery life, Apple is making it easier to quickly charge the watch during short windows throughout the day, presumably so that you don’t have to charge it overnight.

The Apple Watch Series 7 has a brawnier build

Apple is largely focusing on exercise tracking for the Apple Watch. The Series 7 should be more suitable for outdoor activity since Apple claims it has a more durable build. How you’ll use it: The Series 7’s increased durability could pair nicely with the new cycling features in WatchOS 8. The new software brings an updated version of fall detection that Apple says can tell the difference between falling off a bicycle and a different type of accident. Apple also says WatchOS 8 should be able to automatically detect outdoor cycling workouts. 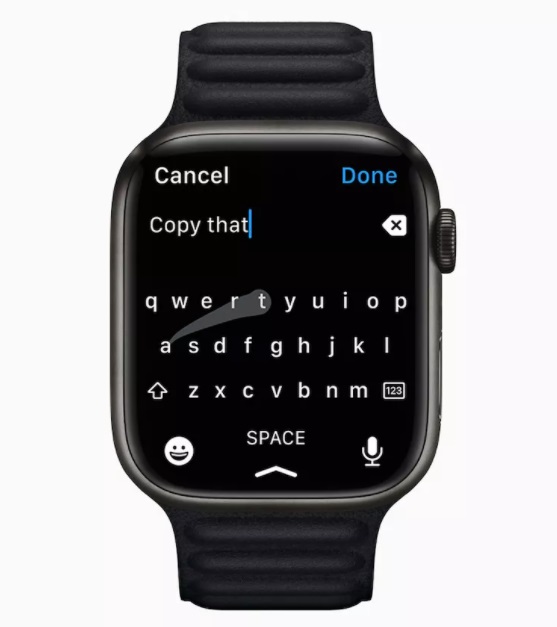