SpaceX made history today, flying NASA astronauts Doug Hurley and Bob Behnken to space aboard its Crew Dragon spacecraft using a Falcon 9 rocket. The launch, titled ‘Demo-2’, is for the final demonstration mission in the human rating process of SpaceX’s Crew Dragon and Falcon 9, meaning that once this mission is complete, the launch vehicle will finally be certified for operational use for regular transportation of people to space. This was the second attempt, after an initial launch try last Wednesday was scrubbed due to weather conditions.

This is the first time ever that humans have been aboard a SpaceX vehicle as it launched. To date, SpaceX’s Falcon 9 and Falcon Heavy rockets have succeeded in delivering multiple cargo payloads to orbit, but Behnken and Hurley are the first people to make the trip with the private spaceflight company.

SpaceX also successfully landed its first stage booster from the Falcon 9 used today – which means it will recover the first private spacecraft booster that has ever delivered human astronauts to space.

NASA created the Commercial Crew space program to spur the development of private launch vehicles that would also be able to serve commercial customers in addition to the agency, in order to defray the cost of launch overall. Both SpaceX and Boeing ended up placing winning bids on the Commercial Crew contracts, and have subsequently developed human launch systems, though SpaceX is the first to actually fly people on their vehicle after Boeing encountered some unexpected issues in their last uncrewed demonstration flight.

It’s been multiple decades since a human took off from U.S. soil on a brand new launch vehicle, and this is also the first time anyone has flown to space from an American launch site since the Space Shuttle program was officially retired in 2011. Returning U.S. spaceflight capabilities also means NASA won’t have to rely on Russia’s Roscosmos and its Soyuz spacecraft exclusively to transport its astronauts to the International Space Station (ISS) – could save more than $30 million per astronaut per trip as a result.

Today’s launch kicks off a multi-week mission for Behnken and Hurley, which next involves a rendezvous with the ISS around 19 hours from now. Crew Dragon will first take around 30 minutes to perform a manual control test, wherein Behnken and Hurley will take over and fly the spacecraft themselves. This isn’t what would normally happen on a normal Crew Dragon mission, since the spacecraft is designed to make the trip to ISS on its own operating entirely in an automated manner.

After that manual control test, Crew Dragon will once again take over and then fly the remainder of the way to the ISS, where it’ll dock itself with an entry hatch on the station. From there, Behnken and Hurley will transfer over to the station, where they’re set to stay for a period of between six and sixteen weeks, depending on NASA’s determination of how long the mission should last. This is somewhat dependent on staffing requirements on board the ISS, since currently there’s only one U.S. astronaut there in an operational capacity, and Hurley and Behnken will be tasked with assisting with experiments and maintenance on the station. 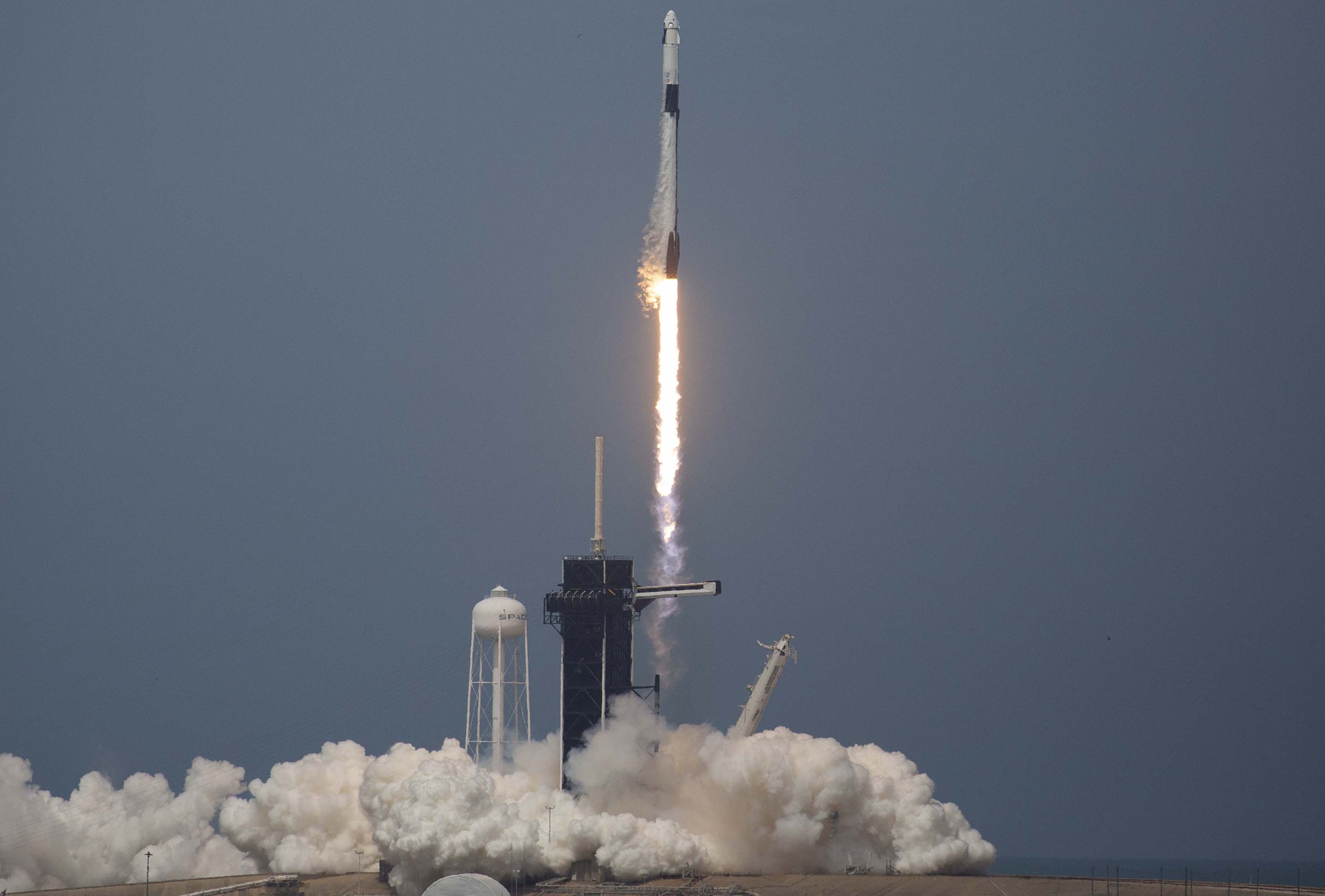 CAPE CANAVERAL, FLORIDA – MAY 30: The SpaceX Falcon 9 rocket launches into space with NASA astronauts Bob Behnken (R) and Doug Hurley aboard the rocket from the Kennedy Space Center on May 30, 2020 in Cape Canaveral, Florida. The inaugural flight is the first manned mission since the end of the Space Shuttle program in 2011 to be launched into space from the United States. (Photo by Saul Martinez/Getty Images)

Once it’s determined when they’re coming back, they’ll climb back aboard the Crew Dragon, seal it up and then detach from the station. This return part of the program is also designed to be fully automated, with the spacecraft preforming the necessary boost-back engine firing to control its re-entry and descent. Once in atmosphere, it’ll release its parachutes to slow the fall back to Earth, and coast to a landing in the Atlantic Ocean, where SpaceX crews will recover the capsule and provide the astronauts their ride back to dry land.

SpaceX plans to begin flying astronauts to the ISS for fully, regular operational missions later this year if all goes well, and it has also signed agreements to begin offering berths to paying passengers for Crew Dragon space tourist trips (likely with an extremely high price tag) as early as next year.